Anti-Muslim campaigns have spread nationwide but the clear majority of them fail, according to a new report released today by Muslim Advocates. Running on Hate: 2018 Pre-Election Report maps and analyzes the rhetoric and campaigns of every anti-Muslim candidate it could identify in the 2018 and 2017 elections and is complete with trends, anecdotes, polling and original interviews with voters. It includes videos, maps, charts and several clear lessons for voters, candidates and campaign professionals. The report’s authors, local advocates for Muslims and a pollster are available for further discussion on the report. Please email [email protected] to coordinate interviews.

Among the key findings of the report: 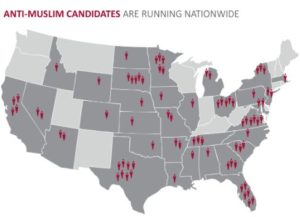 “These campaigns are successful at inflaming bigotry and violence against American Muslims, but not much else,” said Scott Simpson, public advocacy director at Muslim Advocates. “The voter data and interviews and the win-loss rates of candidates all point to the same conclusion: campaigning using anti-Muslim hate is a losing strategy. Anti-Muslim campaigns only appeal to a small and hostile sliver of the electorate. Vast majorities from both parties, almost every demographic group and every region prefer candidates who embrace religious freedom for American Muslims over the absurd anti-Muslim conspiracies that are proliferating in campaigns.”

Muslim Advocates is a 501c3 charity and does not endorse or oppose candidates for office. Muslim Advocates is tracking and responding to this type of rhetoric because hate violence against Muslims is now at an all-time high and, according to California State University-San Bernardino, this rhetoric is strongly correlated to increases in hate violence.