Washington, DC – Today, a coalition of over 200 local leaders, constituents, and civil rights organizations joined Center for New Community and Muslim Advocates in letters to nearly 60 mayors urging them to “unequivocally condemn white supremacist and anti-Muslim hatred and make it clear that bigotry and violence are not welcome” in their communities.

The letter comes in advance of a series of September 9th rallies that were originally planned by the largest anti-Muslim hate group in the country, ACT for America, but amidst national outcry against bigoted and violent protests, ACT has been forced to withdraw from  the events. However, some rallies may still continue as planned.

Following the white nationalist rally in Charlottesville, the letters implore the mayors to reject bigotry in all forms, affirm that all people are welcome in their cities, and issue statements condemning any anti-Muslim or white nationalist events happening in the future:

“The white supremacist violence in Charlottesville and startling rise in hate incidents show that staying silent about bigotry can lead to violence and death,” said Madihha Ahussain, special counsel for anti-Muslim bigotry at Muslim Advocates. “Mayors, governors, and other stakeholders must continue to condemn bigotry and ensure that the hatred inspired by ACT has no place in our country.”

“ACT’s decision to cancel these anti-Muslim rallies is a victory for everyone who rejects racism and bigotry,” said Lindsay Schubiner, advocacy director at the Center for New Community. “This represents a public recognition that ACT’s odious views attract white supremacists akin to those who rallied in Charlottesville. ACT is clearly running scared, afraid of their bigotry being broadly exposed in the event that white supremacists at its rallies commit violence. This is one small step toward justice, but we must not stop working to stem the rising tide of racism in this country.”

This past June, ACT planned a similar series of anti-Muslim Ramadan rallies, many of which were outnumbered by counter unity events. In Lansing, Michigan, people turned out with buckets, sponges, and mops after the ACT rally to “wash away the hate.”  In Houston, different faith communities came together to host an interfaith service event and counter protest in defense of their Muslim friends and neighbors. New York’s counter-protest had 500 people, while others attended an iftar and interfaith dinner against hate and violence that evening. 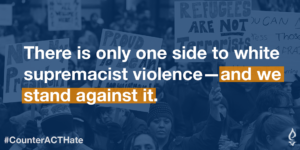