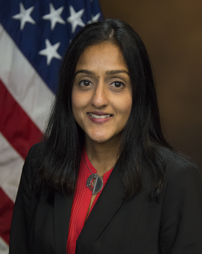 Please join us in honoring Vanita Gupta, the Principal Deputy Assistant Attorney General of the United States of America and Head of the Civil Rights Division for the U.S. Department of Justice.

Muslim Advocates will honor Ms. Gupta with the Thurgood Marshall Award for her commitment to criminal justice reform and to holding perpetrators of anti-Muslim hate accountable.

On Oct. 15, 2014, President Obama appointed Vanita Gupta to lead the Civil Rights Division at the Department of Justice.  As the chief civil rights enforcer for the United States, Ms. Gupta oversees a wide range of criminal and civil enforcement efforts to ensure equal justice and protect equal opportunity for all.

Ms. Gupta has devoted her entire career to civil rights work.  Prior to joining the Justice Department, she served as Deputy Legal Director of the American Civil Liberties Union (ACLU) and Director of its Center for Justice.  Previously, Ms. Gupta worked as an attorney at the NAACP Legal Defense Fund, where she successfully led the effort to overturn the wrongful drug convictions of 38 individuals in Tulia, Texas, who were ultimately pardoned by Governor Rick Perry.  She then helped negotiate a $6 million settlement on behalf of her clients.