Washington, DC – In late June, the State Department announced that, in response to the Supreme Court’s limited reinstatement of the Muslim ban which required exemptions for people with “bona fide relationships” in the U.S., that it would keep the ban in place for grandparents and grandchildren, cousins, nieces and nephews, aunts and uncles, and sisters- and brothers-in-law.

In an attempt to highlight the absurdity of this definition, Muslim Advocates launched the viral #GrandmaBan campaign and a coinciding digital advertising campaign this week. The campaign urges Twitter users to tweet directly at President Trump and has generated over 1,000 tweets, including tweets and retweets from Lizz Winstead, Ashly Burch, AFT President Randi Weingarten, and Eddie Marsan. 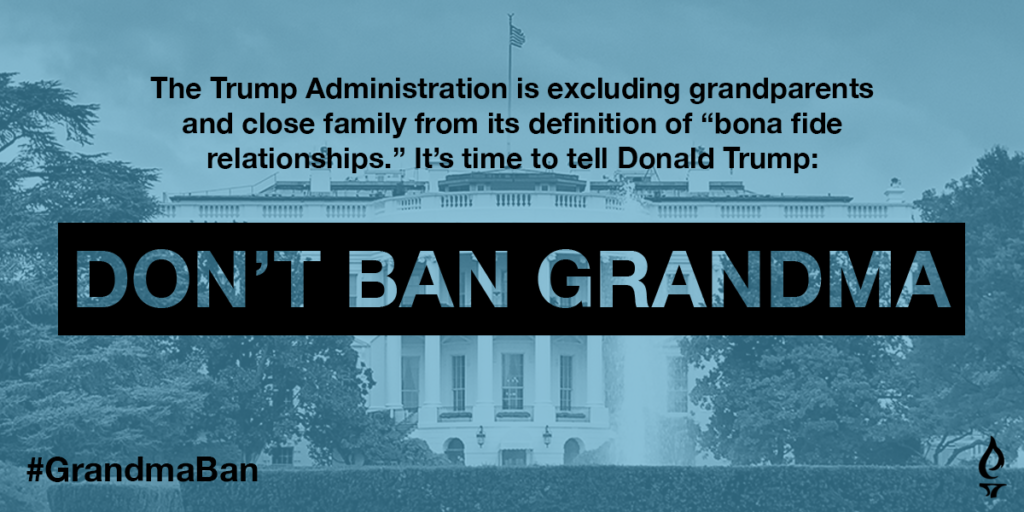 According to Scott Simpson, Public Advocacy Director of Muslim Advocates, “Specifically banning close family underscores the inhumanity of the entire executive order. There is no benefit to separating grandparents from their grandchildren or any other family members from each other, and the grandma ban campaign is illustrating what’s at stake for families in plain terms. This absurd definition of family is another attempt by the Trump administration to overstep its authority: who are they to exclude your grandparents from your family?

“The #GrandmaBan campaign is a way for people of all backgrounds to share their love for their grandparents and their disdain for the Muslim ban. We’ve heard stories of Holocaust and internment camp survivors, grandparents who filled the role of parents, and families unable to say goodbye because of the ban. This ban in another attempt by the administration to make this country a harder place for American Muslims to live, going so far as to unjustly separate families.”

See below for excerpted content and online here for more #GrandmaBan developments.