Yesterday, I was among the diverse and energetic crowd who listened live as President Obama made his first ever address in an American mosque.

It was powerful, emotional and it came at an incredibly important time for our country, especially for American Muslims. You can read Muslim Advocates’ official statement about yesterday’s speech here. To watch a video of the remarks, see below. 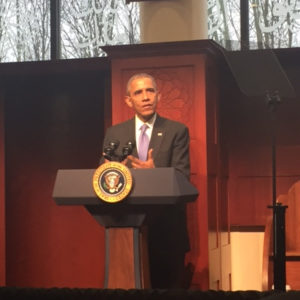 I was able to snap this photo from my phone as the President of the United States spoke movingly about inclusion and religious freedom, reminding all Americans that the AmericanMuslim community has been a part of this country since its founding.

As a parent, the President’s words about young American Muslims were especially powerful to me. On Tuesday, I told my kids I was going to see the President the next day. I was proud to share with them what he said.

“If you’re ever wondering whether you fit in here, let me say it as clearly as I can, as President of the United States: You fit in here — right here. You’re right where you belong. You’re part of America, too.” – President Barack Obama

It was also moving to sit in a mosque – a place of worship like any church, gurdwara or synagogue – and hear the President affirm his commitment to the freedom of religion for everyone, no matter one’s faith.

Part of that freedom, he reminded us, is the opportunity to worship without fear that where or how we pray would make us subject to surveillance by our government.

Though we know much work remains to address the crises of anti-Muslim hate, un-Constitutional surveillance and misguided law enforcement programs targeting our community, we applaud the President’s recognition of the challenges, bigotry and violence that American Muslims face.

Thank you for your support, which has allowed Muslim Advocates to continually encourage the President, and other leaders, to take the kind of action he took yesterday.