Our thoughts and our hearts are still heavy with the recent tragedies in Paris. And, some of the response to this tragedy – stoked by members of the media and elected officials – has also been deeply concerning and disappointing.

As we hold all these ideas in our hearts and minds, we also pause to raise up some of the inspiring and positive moments from the past few days that gave us hope.

1. George Takei’s Powerful Statement Against Racism in the Wake of Terror Attacks

The renowned actor, director, and speaker took to Facebook shortly after news of the attacks in Paris broke last Friday night.

I’m writing this backstage at Allegiance, my heart heavy with the news from Paris, aching for the victims and their…

2. This French Father Explaining to His Son Why They Won’t Leave France

In a moving interview for the French TV show Le Petit Journal, an interviewer talks to a father and son who are part of the crowd gathered to pay their respects outside the Bataclan Theatre, the site of one of Friday’s attacks. In the interview, the father assuages his son’s fears about the “bad guys.” Read an excerpt below, or better yet, watch the video for yourself.

Son: “But there’s bad guys, daddy.”
Dad: “Yes, but there’s bad guys everywhere.”
Son: “They have guns. They can shoot us because they’re really, really mean, daddy.”
Dad: “Yes, they might have guns, but we have flowers.”
Son: “But flowers don’t do anything. They’re for …”
Dad: “Of course they do. Look, everyone is putting flowers. It’s to fight against the guns.”
Son: “For protection?”
Dad: “Yes.”
Son: “And the candles, too?”
Dad: “To remember the people who departed yesterday.”

Then, the young boy turns to the reporter and tells him, “”The flowers and the candles are here to protect us.”

The reporter asks the boy one more question, and the boy’s answer may be the best part of this video.

French father and son have the most precious conversation in i…A father and son have the most precious conversation during an interview by french media at the scene of the Bataclan attacks. I saw that it hadn’t been subtitled in english yet, so I made a quick edit to show the rest of the world how freakin awesome some of our citizens are. They’re my heros. I feel better too now! #paris #bataclan #parisattacksImages and interview are a courtesy of Le Petit Journal . Thank you so much to the LPJ team for this interview and a very touching segment yesterday! Also, thank you for letting this video be accessed by all and not putting it down. Thank you to Angel Le (father) and Brandon (son) for brightening up our day. <3 Original Segment: http://bit.ly/1Lix9L2Original Video (without subtitles): https://www.facebook.com/PetitJournalYannBarthes/videos/1013093998733798/

3. These Powerful Images of Communities Across the Globe Standing in Solidarity with the People of France

NPR gathered dozens of amazing photos from events, vigils, and moments from all around the world. We were touched to see these pictures from San Francisco to China and elsewhere around the planet. Click here to see all 33 images. 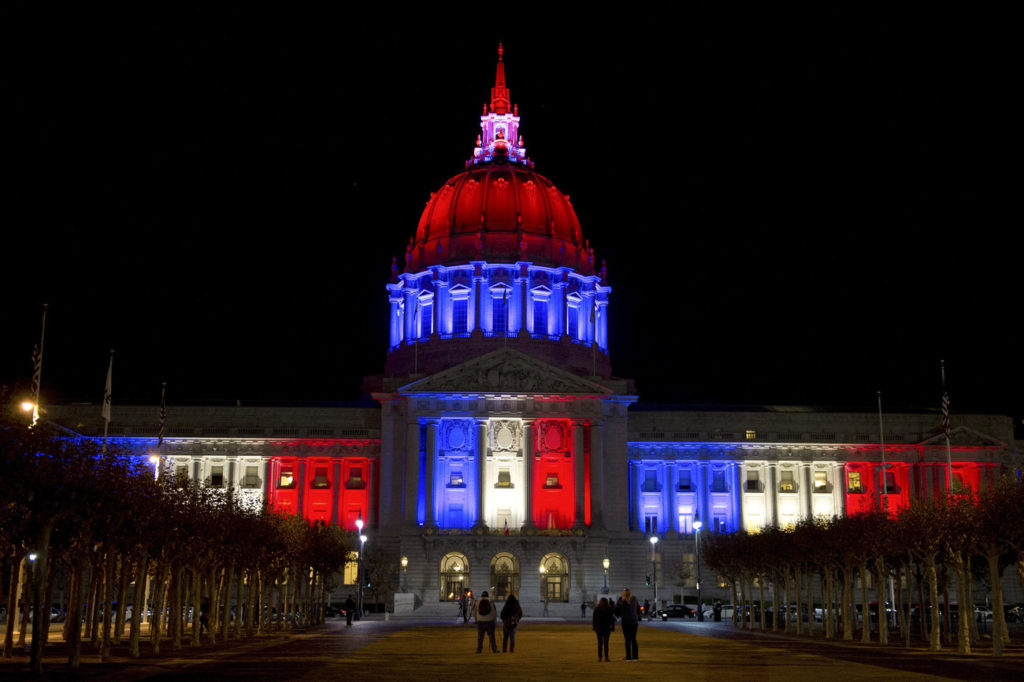 4. This Statement from the Anti-Defamation League, Urging Governors to Reconsider Their Anti-Refugee Stances

The ADL, the world’s leading organization dedicated to fighting anti-Semitism, released a thoughtful and thought-provoking statement. The statement read, in part:

This country must not give into fear or bias by turning its back on our nation’s fundamental commitment to refugee protection and human rights. Now is precisely the time to stand up for our core values, including that we are a proud nation of immigrants. To do otherwise signals to the terrorists that they are winning the battle against democracy and freedom.

The current refugee crisis in Europe is the worst since World War II. The Jewish community is particularly affected by the images of men, women and children forced to flee their homes only to find they are unwanted anyplace else. Many of these refugees are fleeing the same terrorists who perpetrated the horrendous attacks on Paris.

5. Waleed Aly, an Australian TV Commentator and Lawyer, and His Message of Unity

Aly, a host on the Australian TV show “The Project,” urged his audience not to give in to the “us vs. them” mentality, because that’s exactly what those behind the attacks in Paris hope will be the outcome.

In his comments, which drew global praise through social media, he said, in part:

“We are all feeling a million raging emotions right now. I am angry at these terrorists. I am sickened by the violence and I am crushed for the families that have been left behind, but, you know what, I won’t be manipulated. We all need to come together. I know how that sounds. I know it’s a cliche but it’s also true because it’s exactly what ISIL doesn’t want.”

Watch a video clip of his segment here.

6. Professional Football Player Aaron Rodgers, Who Said He Was “Very Disappointed” in the Anti-Muslim Comments of a Fan

In a post-game press conference, Aaron Rodgers took a moment to share his disappointment with a fan who shouted during a pre-game moment of silence.

“I must admit, though, I was very disappointed with whoever the fan was who made a comment that I thought was really inappropriate, during the moment of silence. It’s that kind of prejudicial ideology that I think puts us in the position that we’re in today, as a world.”