New Jersey Muslims get their day in court! On January 13, 2015, the U.S. Court of Appeals for the Third Circuit will hear oral argument in Hassan v. City of New York, the first case to challenge the NYPD’s Muslim spying program. It is the highest court in the country to consider the constitutionality of the NYPD’s program to date. 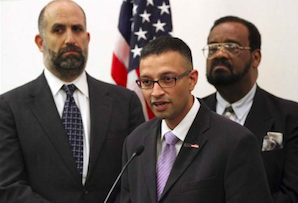 A diverse group of American Muslim plaintiffs filed suit to end the New York Police Department’s invasive and discriminatory spying program. The first legal challenge against the NYPD for intrusive practices targeting American Muslims, the lawsuit seeks an immediate end to the unlawful surveillance and the purging of files maintained by the NYPD.

As documented by the Associated Press, the NYPD has been conducting unlawful surveillance of innocent American Muslims simply because of their faith.  American Muslims were targeted in New York City, as well as in towns, mosques, businesses, and college campuses throughout the northeast, including New Jersey.  Records show that the NYPD took copious notes on the details of American Muslims’ daily lives.

The plaintiffs in the lawsuit are as diverse as the American Muslim community itself: they include a decorated U.S. Army reservist, a small business owner who is also a Vietnam veteran, students and imams.

Over 60 organizations and individuals joined amici curiae briefs in support of the Hassan plaintiffs’ position:

Reply Brief of Plaintiff-Appellants in U.S. Court of Appeals for the Third Circuit – Nov. 7, 2014

Brief of Plaintiff-Appellants in U.S. Court of Appeals for the Third Circuit – Jul. 3, 2014

Defendant’s Memorandum in Further Support of Motion to Dismiss – Feb. 25, 2013

Meet the legal team in the case:

Farhana Khera is the first President and Executive Director of Muslim Advocates.  Prior to joining Muslim Advocates in 2005, Ms. Khera was Counsel to the U.S. Senate Judiciary Committee, Subcommittee on the Constitution, Civil Rights, and Property Rights. In the Senate, she worked for six years directly for Senator Russell D. Feingold (D-WI), the Chairman of the Constitution Subcommittee.  Ms. Khera focused substantially on the USA Patriot Act, racial and religious profiling, and other civil liberties issues raised by the government’s anti-terrorism policies since September 11, 2001. She was the Senator’s lead staff member in developing anti-racial profiling legislation and organizing subcommittee hearings on racial profiling.

Glenn Katon serves as legal director of Muslim Advocates. Mr. Katon has over 20 years of legal experience and comes to us from the ACLU of Florida, where he was a Senior Attorney and Director of the statewide Religious Freedom Project.

During his years at the ACLU, Mr. Katon litigated a wide variety of religious freedom and other civil liberties issues, including immigrants’ rights and free speech cases. Mr. Katon has tried over 15 cases in federal and state courts throughout the country and handled appeals in the United States Courts of Appeals for the Fifth and Eleventh Circuits and the Florida District Court of Appeal. He is admitted to practice in California, Florida, New York, and Texas.

Ravinder S. Bhalla has developed a reputation as a thorough, skilled and experienced advocate in criminal defense and civil litigation. Mr. Bhalla has also gained national recognition for his advocacy in civil rights matters on behalf of the Sikh American community in the United States.  He was lead counsel on behalf of the first Sikh officer of the New York City Policy Department (NYPD) in a successful federal lawsuit challenging the NYPD policies that restricted his client’s religious practice.  In 2003, Mr. Bhalla successfully represented a Sikh American businessman in a post-9/11 racial profiling lawsuit against Delta Airlines, where a passenger had been unfairly profiled and humiliated by a flight attendant who told the other passengers that he might cause “trouble” and would need to be “subdued”.  In 2000, Mr. Bhalla brought a successful discrimination lawsuit against Fleet National Bank, resulting in a both a monetary settlement and non-monetary commitment to recognize and respect the religious rights of Sikh American employees and customers.[/toggle]

Currently in his third year at Rutgers University – New Brunswick, Moiz is focusing his studies in molecular biology and biochemistry and anticipates receiving a Bachelor of Sciences degree in 2014.  Since his faith is important to him, Moiz stays active within the Muslim community at Rutgers by attending weekly Muslim Student Association (MSA) lectures.  Recently, Moiz was elected Fundraising Head for his university’s MSA chapter for the upcoming school year.[/toggle]

He is the Convener of the Council of Imams in New Jersey, a body of Muslim Leaders from various mosques and centers located in New Jersey who cooperate to develop and implement initiatives to improve the quality of life of the citizens in the communities they reside.  He also is a co-founder of the Newark Interfaith Coalition for Hope and Peace an organization of diverse faith leaders working to reduce violence in the City of Newark.  As a consultant he serves as a director on several boards in addition to conducting lectures, workshops, counseling, educating and training people in organizational and project management, ethics, moral guidance, personal and professional management, social responsibility and how to achieve ethically, intellectually and materially balanced lives.

Abdul Kareem Muhammad is the Resident Imam of Masjid Al-Haqq, and Director of Education of the Clara Muhammad School, Newark, New Jersey.

Imam Muhammad is the formal Chaplaincy Supervisor for the Department of Corrections in New Jersey, and is a member of the American and New Jersey Chaplains’ Association, and Convener for the Interfaith Dialogue Committee of Newark, New Jersey.

Imam Muhammad is a graduate of Saint Augustine’s College in Raleigh, North Carolina, where he earned a Bachelor of Arts Degree in Education.  He is married to Kareemah Muhammad, and is the recipient of numerous awards for outstanding Community Service, and performed Hajj in 2004.[/toggle]

What People Are Saying About the NYPD Spying Program

Find out what national and local government and community leaders are saying about NYPD’s surveillance program.

U.S. Representative Rush Holt (D-NJ)
“America is not safer when we spend valuable law enforcement resources on investigating the innocent multitudes rather than identifying the guilty few.  This lawsuit is a thoughtful, sensible step toward bringing law enforcement practices back into line with constitutional protections and the standards of good policing.”

“Casting suspicion on people on the basis of their race, religion, or ethnicity without any legally valid reasons is not the way we behave in America. Profiling in policing is a substitute for thinking.”

U.S. Representative Judy Chu (D-LA), Chair, Congressional Asian Pacific American Caucus
“National security must be a priority for this country, but if we destroy those things that make America great in the process, then what are we protecting in the first place?”

U.S. Representative Steve Rothman (D-NJ)
“We live in very dangerous times and protecting our country and all of our families must always be our top priority, but targeting individuals based on their religion is never acceptable and fundamentally un-American.”

Luis A. Quintana
“I’m a Christian but I stand with my Muslim brothers and sisters.  If it’s Muslims who are spied upon just because of their religion, which group will be next?”

Ronald C. Rice
“We should join them (Muslims) in the name of religious freedom, respect, and the Constitution.”

Darrin S. Sharif
“The City Council can and will do something about this situation. You have my solid commitment that we will do whatever is required…we can’t walk into a mosque without worrying about someone standing on top of a building or snapping our picture.”

Jumaane D. Williams
“I have serious questions as to the motivations of the NYPD’s surveillance program, especially with this new information. With each piece of breaking news, the overall picture of civil rights abuse becomes more disturbing.”

Scott Stringer – Manhattan Borough President
“Whenever the police get wind of a potential threat, we expect them to pursue the matter with all deliberate speed and keep New York City safe.  But it is troubling when people are subject to surveillance and investigation simply because they are members of a particular group. We need to ensure that our efforts to combat the threat of terrorism does not trample on the civil liberties that all citizens have a right to enjoy.”

Ronald Davis – East Palo Alto Police Chief
“What is equally troubling and unsettling with the idea of using race, national origin or religion in the ‘national security’ context is that it suggests the most powerful nation in the world equipped with law enforcement and national security experts second-to-none must rely on bias and sloppy guess-work to secure the nation, rather than rely on human intelligence, evidence-based strategies, science, technology, and industry expertise. I want to strongly emphasize this point: there is no reason to profile on the basis of race, religion, national origin, or ethnicity, whether it is justified as an effort to protect our communities from terrorism, illegal immigration, or violent crime.”

Robert Jackson – NYC Council Education Committee Chairman
“When you step on one religious group, Muslims, then you’re stepping on every religious group, and if you take the position, ‘Well its not me.  I’m not concerned about it’; it’s not you today, but what if it’s you tomorrow?”

June 6, 2012
Muslim Advocates files lawsuit against the NYPD for racial and religious profiling of Muslims in New Jersey.

May 2012
Representative Rush Holt, D-N.J., and Representative Keith Ellison, D-MN, introduce a resolution proposing to end NYPD programs that had enabled officers to conduct surveillance in mosques and venues as well.

September 2007
NYPD begins surveillance outside of its jurisdiction and in Newark, New Jersey.

August 2006
Investigations within the five western towns of Suffolk County, New York began. NYPD officers placed mosques, cuisines, and meat stores under surveillance, taking note of the ethnicity and faith of the owners as well as people visiting these locations.

May 2006
NYPD attempts to identify potential sources of danger due to US-Iran conflict and suggests focusing “intelligence collections at Shi’a mosques.”

February 2006
NYPD began surveying mosques and Muslim individuals in the New York area to speculate the potential backlash from publicizing a Danish cartoon of the Prophet Muhammad.

Hear From the Plaintiffs