Like many Americans, I have been watching with shock and sadness the news and aftermath of the death of Michael Brown, an unarmed youth shot and killed by a Ferguson, MO, police officer.  As our nation mourns his loss, at Muslim Advocates we are also renewing our efforts to prevent and end racial and religious profiling.

Targeting individuals on the basis of race, religion, or another characteristic protected by the Constitution has been a longstanding and troubling feature of American law enforcement.  Michael Brown’s death underscores the ways in which African-Americans – in particular young, African American men – continue to be subjected to racial profiling by law enforcement.  Sadly, we know it doesn’t end there. 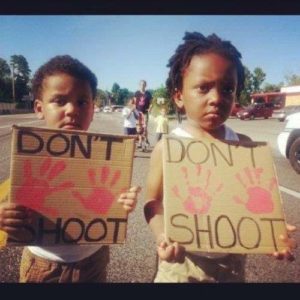 Profiling affects many diverse American communities.  Whether it is African Americans who are gunned down for “walking while black,” Latino Americans who are stopped and questioned about their immigration status, Sikh Americans who are routinely stopped and searched at our nation’s airports for wearing a turban, or American Muslims who are targeted for surveillance in their communities and mosques for “praying while Muslim,” we know that biased policing is a pernicious, systemic problem that has gone on for far too long.

So what can we do?  Because of supporters like you, we at Muslim Advocates stand up for the rights of all Americans.  Profiling of American Muslims will end only when profiling of all Americans ends.  Muslim Advocates has brought high-impact, strategic lawsuits that challenge discriminatory policing practices.  We have testified before Congress and met with U.S. Attorney General Eric Holder and other senior officials to educate policymakers about steps they can take to prevent and end profiling. 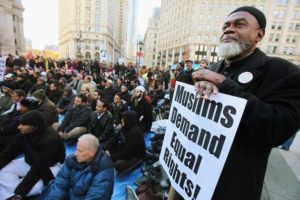 But we know we cannot do this work alone.  It has taken crucial alliances with civic, faith and civil rights organizations to raise our voices collectively.  In fact, today Muslim Advocates joined with the Leadership Conference on Civil and Human Rights and a broad coalition of organizations calling on Congress to pass the End Racial Profiling Act and the Attorney General to fulfill his commitment to revise and strengthen federal guidance to ban racial profiling by law enforcement.

Please know this: our resolve, which has been strong, has only been further strengthened.  It is our hope that out of this tragedy, our nation will finally awaken and take the necessary steps to end racial and religious profiling.

My colleagues and I will continue to provide you updates in the days and weeks ahead.

If you have any questions about our work to end racial and religious profiling, please do not hesitate to let me know.