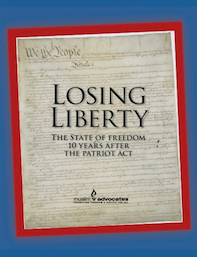 Muslim Advocates released a report on the tenth anniversary of passage of the USA Patriot Act. Losing Liberty: The State of American Freedom 10 Years After the Patriot Act illustrates how the law opened a new era in which federal law enforcement erodes America’s cherished freedoms and wastes precious resources. In the report, which includes a forward by former Senator Russ Feingold, Muslim Advocates sets forth concrete steps Congress and the President should take to amend the law and uphold our nation’s founding freedoms, which are guaranteed to all Americans, regardless of faith.

The report offers an honest look at how the government has created and expanded unprecedented powers to spy on innocent Americans, how charitable giving has suffered because of stifling fears and confusing regulations, and ultimately, how the acceptance of religious and racial profiling has created a hostile environment and a breeding ground for anti-Muslim rhetoric and hate.

Some highlights from the report include: